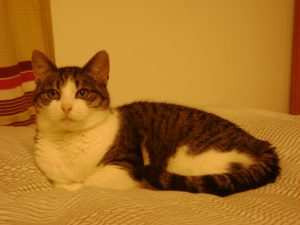 Our lovely tabby cat Xena has been missing since the 5th October 2018. That’s four weeks now and we still miss her – a lot!

When I say we, I mean my flatmate and I. We’ve been looking after Xena for nearly a year. Her owner, an ex-flatmate of mine, left her in our care last December and we were delighted to have Xena in the house. She’s a very communicative cat and would always come and greet us whenever we came home.

She used to take a figary now and again and dash around the corners of the house for no reason at all. We’d be in stitches laughing, the sound of her claws on the wooden parquet floors scrambling as fast as she could, to get to nowhere in particular. She would also sometimes sleep on her face, which cracked me up. I’ve never seen a cat do that before.

Both my flatmate and I have done everything we possibly can to try and find Xena. We put coloured posters of her with our contact details on bus stops and lamp posts in the area. I put messages on six facebook pages, such as Lost & Found Pets Edinburgh, Lost & Found Pets in Edinburgh & The Lothians, Edinburgh Dog & Cat Home, Sunny Harbour Cat & Kitten Rescue, Cats Protection League Edinburgh and I Love Leith, in the hope that someone might spot her and contact us. I also phoned all the local vets, the Dog & Cat Home in Seafield, the SSPCA in Balerno, the Cats Protection League Edinburgh and still am phoning them regularly, in case anyone hands her in. I even played the concertina in the sitting room, with the window open, wishing that she’d hear the loud music and come back. I don’t even know if cats recognise music or songs. Do they? It was worth a try though.

Xena is a dark grey tabby cat, with an all-white chest and undercarriage. She’s 18 years of age, female, has no collar or microchip and answers to Chee Cha. She was in good health when she went missing. She’s an indoor cat mostly but liked, from time to time, to get outside and either go for a wander for about ten to 15 minutes or just sit outside the bedroom window and enjoy the sunshine. But she would always come back. This time she didn’t. We think something scared her off and she couldn’t find her way back.

Apart from the posters we put up and the facebook posts, we also went out looking 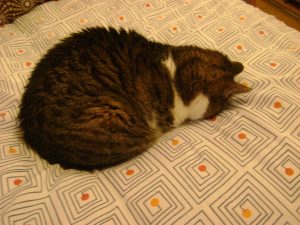 for her for two weeks after she disappeared, sometimes twice a night, around the local area. I put leaflets through people’s letterboxes hoping that if someone had taken her in, they might recognise her and phone us or bring her to a vet. We did get quite a few phonecalls and facebook messages from concerned people who said they saw a cat very similar to Xena in one or two areas nearby.  The only thing is, that for a start, we don’t know if the cat they saw was actually Xena and secondly, it took us an hour to get from work to the place where the cat had been spotted. So if it was Xena, she probably had moved on by that stage. Once she gets to know you, she is very friendly but outside on the street she would be frightened of strangers.

Ideally what we’d like to happen is for someone to see her, take a photo of her and put it on one of the facebook pages mentioned above (to confirm it’s Xena), catch her and either contact us or a local vet. That’s a very difficult thing to do, I know, for a number of reasons.  Cats move so fast, especially if they’re scared and it would be hard to get a photo of her. Trying to catch cats or bring them into your house, can also be very tricky. One woman who phoned me told me that it took her two years to coax a stray cat into her house, where she fed her and then brought her to a vet.

Some of the tips that were passed on to us when looking for cats were very helpful and might help others in the search for their beloved animals. They are as follows:

Posters/flyers should have the following information on them: 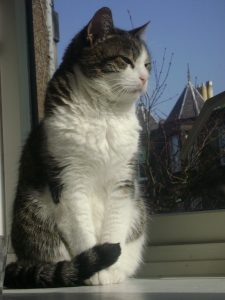 The worst thing about your cat disappearing is not knowing what happened to them. Are they still alive, have they been taken in by someone or are they still wandering the streets searching for food and their home? So far we haven’t heard of any cats similar to Xena that have been killed on the road, thankfully.

We’ve stopped looking for her on the streets but still keep an eye on the various facebook pages/groups. She brought us so much joy and comfort. Maybe she’s being looked after by someone and if that’s the case, then good. That would be better than hearing that she’s been knocked over on the road. We miss her but she hasn’t been forgotten and we hope that someday she might find her way back to us.