I was heading to Kaikoura for two days on my way north and even though the weather wasn’t great when I arrived, it was glorious the day after. It’s one of my favourite spots in New Zealand and I’ll always have a soft spot for it.

Lesley drove me to the bus stop at 6.50am. Intercity buses were picking me up at 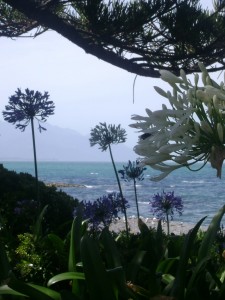 7.19am at the bus stop opposite Harrington’s Bar in Belfast. When it arrived, Lesley and I gave each other a big hug and I got on the bus. We said we’d keep in touch. She was great and looked after me like a mother. She’s a really lovely person and we hit it off from the start.

I was going to miss Christchurch. It was a great six days. I packed in a lot of things and met a lot of people. I also made a lot of connections here and that’s always good. When I got to Kaikoura at 9.20am, I called the taxi shuttle that I had the last time I was here two years ago but the number wasn’t available anymore, so I went into one of the local hostels on the main street and they organised another taxi for me. I had booked two nights in the Lyell Creek Lodge on Beach Rd and I called Aaron, the guy who runs the hostel, to see if I could check in. He said normally the rooms aren’t ready until 1pm but he said he’d try to get it cleaned as soon as possible. It was ready within forty five minutes, fair play to him and I was able to dump my stuff.

I’d stayed in this hostel twice before and it’s one of my favourites in New Zealand. I really like it because even though it’s a bit out of town, it’s pretty quiet, very clean, homely,

they have a lovely garden area at the back and Aaron has always been very helpful. The weather wasn’t great that day but the following day, the sun was splitting the stones and it must have been about 25 degrees. Glorious!

I didn’t do much that day as I was wrecked from being up so early – 5.30am. That’s early for me! So after buying food for the next few days, I had a quick walk into town and that evening, just grabbed something quick to eat at The Adelphi Speights Bar and went back to the hostel.