The last time I was in Lake Tekapo, I noticed on a map, that there was a river called the 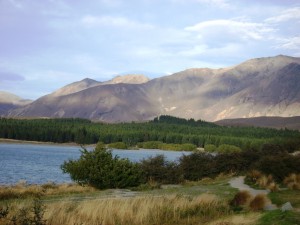 Mc Auley river in the area. I got in touch with this woman called Marion Seymour, who has a sheep station at a place called Ferintosh, near the Mc Auley River. I was told that she was a good person to contact with regards to finding out more about the river. She and her family had been looking for information about the name of the river.

I found out from the New Zealand Archives, in Wellington, that the river was named after Thomas Babington-McAuley, an English poet, historian and writer, who in the archives was connected to Julius Haast. I forwarded this information to Marion’s daughter via email and she said to let her know the next time I was back in the area. So that was one thing I wanted to do this time, when I was back in Lake Tekapo: catch up with this old acquaintance.

I only had the email address of her daughter. So I emailed her and in the meantime, found Marion’s telephone number in the phone book. I got talking to her husband that evening and said I’d try and call back the following day. She called me the following morning to say that she was delighted to hear from me but was busy with rowers who were staying in her house for a rowing competition that was on in the area and wouldn’t be able to get down to Lake Tekapo to see me. She suggested that I try to find some way of getting up to Ferintosh. 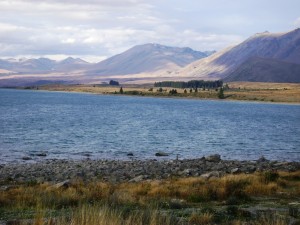 Ironically, I saw a notice on the door of the fridge at the hostel, to say that yesterday, there was a trip to the Mc Auley Hut and if people wanted to join, they could contact the guy who was organizing the whole thing. I was thinking to myself “Feck, I missed it by a day, bloody typical”! I asked in the local supermarket and also asked the owner of the hostel, who knows Marion, to see if I could get a lift with anyone driving up there but it just didn’t work out. So I had to “give up the ghost” on it. There is more to this story though, read about it in the “Star Studded Sky” post.